For the uninitiated, ‘Tarak Mehta Ka Oolta Chashma’ is a very popular Hindi comedy caper which appears 5 days a week on Prime time and many more times through the day on SAB TV.  The long running show extolls the virtues of harmonized community living in a housing society in Mumbai. Therefore the central characters range from a Gujarati family where the husband is predictably a trader, a Maharashtrian family, a Sardar (Sikh) and Parsi couple – the Sardar expectedly runs an auto garage, a South Indian Iyer and Bengali couple where the man is a scientist and so on. The show takes stereotyping and caricaturing to Himalayan heights. The Sardar is shown as a loud, short-tempered and emotional type who breaks into a fight at the slightest provocation while being good at heart.  The Gujarati trader is shown as one who is money minded while being respectful to elders and of course good at heart. The South Indian Iyer is a scientist and supposedly intelligent, appears with a Vibhudi (holy ash) smeared face even early in the morning, talks in highly accented Hindi, drinks coffee all the time and of course is dark-complexioned.  One can excuse this daily opera as the title itself claims – “it views things with an oolta chashma”. When you are day in and day out watching this and learnt to ignore and  enjoy, other small inanities like what features in SRK’s latest journey ‘Chennai Express’ don’t bother you. But when the trailer for the same hit first and later the film hit the marquee, I could see some uproar in the online space not that these matter now as the film has more than collected its quota of crores. (Read this)

Frankly I’m not surprised by this noise. This is not the 1st time a SRK film sort of pokes at  South Indian sensibilities. We saw it in ‘Om Shanti Om’ – where SRK is shown appearing in a South Indian film and spitting some ludicrous Tamil dialogues like “Enna Rascala”,…,… Enna Rascala ??? In which part of South India can you hear this?? Then of course in ‘Ra One’, SRK is a Subramaniam and yes is a geek and stuffs noodles mixed with curd using his hand. And many more frivolousness like that.

The blame award for setting this stereotype of South Indians in Bollywood films and Hindi serials and therefore in the minds of Indians by and large must go to that talented comedian Mehmood in the movie ‘Padosan’. If you want one good example for comedy of errors – this could qualify well for it. Mehmood’s character is one Master Pillai (usually a Malayali surname), a Tamil music teacher who keeps saying “Aiyyaiyo”, his makeup is with ‘Pattai vibhudhi’ (lines of holy ash) and speaks Hindi in typical Andhra style. When this movie a good comedy became a super hit, no one could stop the ‘aiyyaiyo’ juggernaut since then. So much so that later in Amitabh’s Agneepath, Mithunda plays the role of ‘Krishnan Iyer YAM YAY(MA)’ and mouths Hindi dialogues in the same way as Mehmood in ‘Padosan’ and even waltz away with the National award for best supporting actor that year.  In both these cases and in fact many more to follow, film makers have just taken the easy route of painting all South Indians in one ‘Madrasi’ brush. That Hindi is spoken completely differently in the 4 states of South India seems to be a best kept secret. 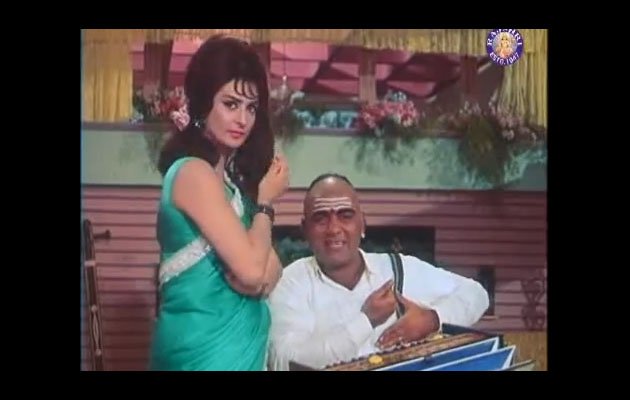 The second best award in this category must go to that “Quick Gun Murugan” a character made of mostly inaccurate Andhra/Tamil/Kannada/Kerala clichés.

The response to the uproar to ‘Chennai Express’ was very much in expected lines. Why should South Indians take offence so much to this stereotyping? Don’t Hindi films regularly take potshots at Sardars, parsis, Gujjus,…,… Don’t you guys show Hindi speaking North Indians in poor light ever? So what’s the big deal in this?

My own issue is not with stereotyping or caricaturing per se. Comedy genres in general allow for stereotyping. But my appeal to all writers/ film makers whether from North or South is “For heaven sake, please do your research properly”

Just yesterday I watched the newly released ‘Madras Café’ and came out very impressed by the whole film. Here I must add that the kind of detailing and research which have gone into casting, characterization, dialogues,… deserve special mention. Tamil characters are shown speaking in Hindi but not of the Deccan “aatha/jaatha” variety.  Of course this movie is no comedy caper.  My point is – go ahead with stereotyping and typecasting. But do that with some accuracy and after some research.  Watch out for changes happening in the horizon and don’t get stuck with age-old stereotypes. ‘Padosan’ was released in 1968 and this is 2013.  And I am a South Indian and I’m not a geek, Mr SRK.

Postscript: This was a joke narrated by a Parsi gentleman in my earlier company many years back and the joke goes like this. His brother a very accomplished chef associated with the Taj group of hotels was posted in Madras when Taj Connemara opened shop in the city. After quite a lot of research on the Tamil’s eating habits, they came up with the menu for the buffet dinner spread. Once the hotel kicked off the master chef was keen to hear people’s feedback on the food. So in the 1st few days he personally talked to patrons and what he heard was not music to his ears. They kept improving the food, dabbled with the menu,… and still the response was not exciting. Finally he decided to ask some of their own employees to taste the food and tell what is/are wrong. There he got the answer which was:

“Sir the food tastes fantastic, the spread is great, priced right but where is the thayir sadam (curd rice) Chef ??? “ 🙂 🙂 🙂