Delhi, India’s capital reported around 1600 new cases yesterday with the test positivity rate dropping to 2.5% from a high of 35% in April. Mumbai, the commercial capital reported around 1300 new cases yesterday. In the 1st half of April, the daily cases were averaging 10000 plus.  Both these cities are under near complete lockdowns and the reduction of activities has helped to bring the case load down. Elsewhere in India, many cities and towns are still showing a worrying trend and the respective authorities have imposed circuit breakers and I am certain the numbers there will also show a decreasing trend in the coming weeks.

Now with the decrease in the case load in Mumbai, already there is a clamour to “Unlock” so that business activities can resume. In Delhi, the Chief Minister has said that if the cases continue to drop for another week, his government will start the process of unlocking. As we saw in the past, when the lockdowns are eased, there is a chance that the case load goes up. It is a vicious cycle of numbers going up and down with locking and unlocking. Hence, at this point of time, the only option we have, to break this cycle is to rapidly vaccinate majority of the population. 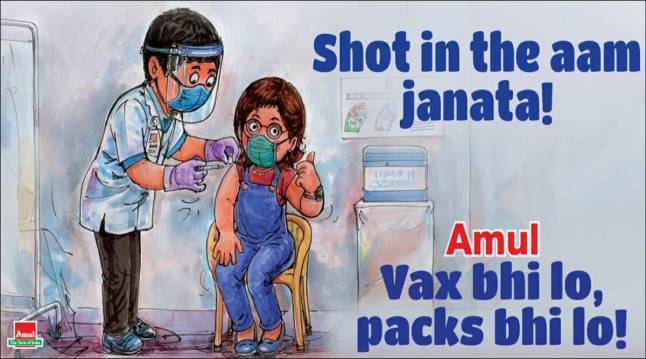 India’s vaccination program thus far has only flattered to deceive. The programme kicked off on the 16th Jan, 2021. It is now over 5 months and yes, we have administered over 18 crore doses but, the coverage has only been 3% of the population. If we continue at the same pace, we will take years to cover the total population by which time, wreckage on all fronts due to Covid will be humongous. It is clear as daylight that we have to up our ante on the vaccination front as of yesterday.

This is where the government’s overall planning on the vaccination program begs all kinds of questions.   During the initial phases of the program that was meant to cover health workers and later senior citizens, one thought that the program was proceeding smoothly. However, it was during the 2nd phase – that of citizens over the age of 45 commenced, the whole program started falling apart. From a phase of vaccine hesitancy we quickly moved to vaccine shortages. And this was happening exactly at the time when the second wave Covid numbers were hitting the roof on a daily basis.

A panic struck government facing fire from all directions on a single day opened up the vaccination program whereby it allowed vaccine makers to sell 50% of their stock to states and private sector. And in another bizarre move, it opened up the vaccination to 18+ age group with a caveat that this will not be sponsored by the Central government.  Bizarre, because the opening up happened when there were no sufficient stocks to cover the 45+ age groups adequately.

Today as far as vaccination is concerned, there is a strange situation. As I mentioned earlier, there is less vaccine hesitancy among people. There is a good awareness and urge amongst many to get the vaccination done. However, due to the shortages, we are back to the good old “IRCTC” days. The tyranny of OTPs, slowly loading site and the fastest finger first routine are back. Those who are not IT savvy, have to make the daily trips to the centre and try for walk in jabs and of course deal with big lines there, that too during Covid times. The Cowin portal which at the outset is impressive is a gate keeper today. And for some strange reason it is available only in English language!

As I have written in my earlier posts, as far as Covid is concerned, there have been many unknowns. The magnitude of the second wave came as a big surprise and caught all of us in the back foot. I have argued that no government in the world could have planned and smoothly handled a wave which is 3X and 4X times the peak of the previous wave in terms of hospitalisation requirements. On this, the barrage of excessive criticism on the Indian Government has been a bit unfair and we should cut the government some slack on this.

Having said that, where the Government and here I mean the Central Government, has been found wanting is on the vaccination project front. In this project, there were lesser or no unknowns. Data of the population, the production capacities of the indigenous vaccine makers were all available right in front. Yet, we did not move on securing enough stocks of the doses for vaccination. It is not clear if it is executive decision making or bureaucratic sloth that has landed us in this situation. Either way, we missed the bus.

While the important aspect of arresting the second wave is in progress, the Central Government must shift its priority to bringing the vaccination program back on track. We are now seeing that the program of state governments procuring vaccines directly is not taking off. In response to the global bids floated by the Municipal Corporation in Mumbai (BMC), only suppliers of Sputnik have quoted. And there again, with the stringent supply conditions of the tender, I doubt any supply will happen in the near future!

Therefore, the onus is on the Central Government to ensure sourcing of the required doses of vaccines required to vaccinate at least 70% of the population by end of this year. That would mean making available over 160 crore doses from now till December. In a recent press conference, the government put out a table that said that the Production/Availability of vaccines from August to Dec is 216 crore doses. With this availability picture, has the central government placed the orders on the vaccine makers already at least for the approved ones? Are the approval process for the other vaccines on queue put on fast track? Has the government assessed the working capital requirements of the indigenous vaccine makers and committed the same? Is the supply chain secured for the production of the vaccines as per capacity? IS work happening on the Cowin site to make it more citizen friendly?

If the answers are yes, we have learnt from the past mistakes. If No, we have decided to live “Ram Bharose”.