For the past few weeks or so, I am certain that only one question is uppermost in the minds of most Indians. And that is not “Who will become the next Prime Minister”? But it is – “Will Narendra Modi continue as the next Prime Minister?”  Everything else doesn’t seem to matter so much.  As we near the counting day which is still couple of weeks away, the excitement and the suspense is heightening. The excruciatingly long drawn poll schedule extended over some 7 phases has only added to the nervous excitement of most Indians. 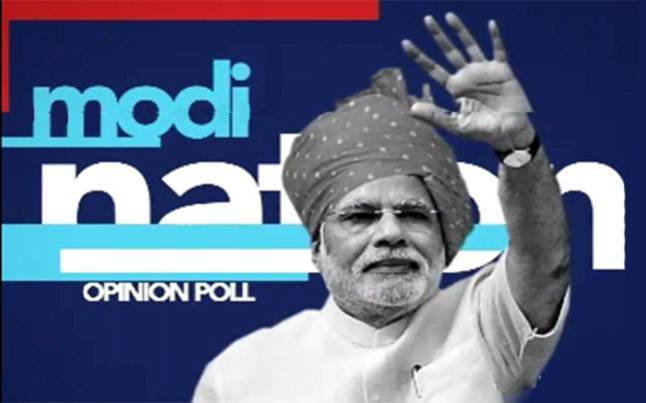 This is manifesting across India in offices, in nukkad tea shops, in local trains, in parties, in cabs and most of all in WhatsApp groups where the hotly discussed topic in this hot summer is if Modi will get a second term. For one who has been keenly following Indian politics for more than more than three decades, I don’t remember a previous time when one person captured the imagination of people the way Modi has now. And capturing the imagination in both extreme ways. It’s either you love him or you loathe him.

With the ban on opinion polls and exit polls when the poll process is underway, it is now left to individuals to speculate on what is going to happen. As the election progresses phase wise, we find the whole media caravan moving along with ground reports where star anchors, editors, reporters and other sundry journalists try to decipher how the wind is blowing!

In all these “ground reports” which are based on hopefully random conversations, I do feel that we end up hearing what we want to hear! So if the ground report is from a Modi follower, then it is in full some praise of Modi for the work he had done in the past 4 years in terms of pucca houses, roads, toilets…! And if the report is from a Modi hater, then it will be critiquing Modi for doing nothing. And believe you me, the reports could be from the same towns/villages!

And in an effort to play safe, most of the ground reports by star anchors and editors have ended up saying

“There is no Modi wave but there is an undercurrent!”

“There is dissatisfaction for Modi but no hate!”

In putting out these ground reports, will common people be left behind? So, empowered by the powerful vehicle called the “Social Media”, we also have ground reports of “People like Us”!  We also give our conclusions based on random chats with Taxi drivers, maid servants, Chowkidars, Doodhwalas and so on.

After the round of ground reports we will be fed with a surfeit of exit polls, come the May 19th. In India we have seen that even pollsters tend to see what they want to see. In India now, opinion polls, exit polls and psephology have become major revenue streams for channels and pollsters thanks to the multiplicity of national and regional news channels. Though forecasting is considered a science we have seen that the forecast results swing from one end to another and rarely do we see a common band making it a perfect modern art! In modern art you see what you want to see!! Ergo, pollsters and the polling company’s own bias come to play in the prediction. In addition to bhakts, bhakt reporters, bhakt anchors, bhakt channels, welcome to world of bhakt pollsters. Would you believe if I say that for one of the state elections, one polling company had two different exit poll results for two different channels!

Dr. Prannoy Roy of NDTV who can be credited for introducing the concept of opinion polls, exit polls and psephology in general to Indians, in his latest book – The Verdict, covers the aspect of the complexity in Indian elections in great detail. No wonder opinion polls and exit polls and the much touted ground reports have more often than not missed the mark when the actual results are out. Hence in a diverse, pluralistic country like India where nothing is common and for every aspect, the opposite is equally true, if a forecast is correct, it could only be a stroke of luck! And that’s why I feel venturing out to hazard a guess on any election outcome in India and in particular the ongoing Lok Sabha polls is fraught with high risks of getting it all wrong!

As experts do always, it is wiser and certainly easier to attach logical explanations to the results as they unfold on the 23rd. Hence I am curbing my instincts to join the ground reports band wagon.  And will stick to a detailed blog post to give my take on the results post 23rd rather than sticking my neck out today!! Having said that, I go back to where I started. No leader has taken the mind share of Indians as much as Modi in the recent times. When “mood of the nation” poll has become “Modi of the nation poll”, he must be doing something right, right? All of it cannot be just “Marketing” as some rue! After all great marketing has not saved a bad product in history! Or has it? Is Trump winning again? 🙂 🙂

Afternoon on Sunday exactly a week ago in India, suddenly eggs went into short supply mode. Didn’t they all land up on the faces of psephologists and many pollster turned anchors in Delhi and other places??? For more than 3 months, India had been hijacked by elections in one state – Bihar. At the end of the tiring, long drawn 5 phased elections and just before the actual counting on 8th Nov (last Sunday) – almost all channels went on an overdrive with telecast of their exit poll results. The channels had used different agencies to conduct the same, extrapolate the vote share into seats and projected the results. However, in the afternoon when the actual results started coming in, it was clear that all the channels and their agencies were way off the mark. While all the channels had predicted a very close election with a wafer thin majority either in favour of the NDA or the Mahaghatbandhan (MGB from here), the actual outcome was more than a landslide win for the Nitish led MGB and a massive blow to Modi led NDA and ofcourse to the pollsters!!! Ironically the one agency (AXIS) which had got it correct didn’t get the opportunity to air their poll results. The channel’s (CNN-IBN) management thought it outrageous to telecast a poll which gave 169-183 seats to the MGB we are told!!! Amidst all this mass Exit poll debacle there was only one individual – Dr. Surjit Bhalla who stuck his neck out and gave 175 seats for the MGB just by his own forecast model (not exit polls) in his Indian Express article a few days before the counting and got it right.

This massive blow to Modi may be a 1st since his historic 2014 win, but for the pollsters this blow is not the 1st. Before the Bihar elections when Delhi went into polls this year, the same thing happened. While most polls predicted a close fight between BJP and AAP, the final result was clean sweep by the broom party. None of the exit/opinion polls captured that kind of a sweep. In the 2014 Lok Sabha elections again it was only one agency – Today’s Chanakya which correctly called the outcome. Most others projected just a simple majority for the NDA.

Inspite of this way off their mark predictions what is the bet that the same agencies will not again carry out opinion polls/ exit polls the next time around?? These are competitive times for the channels and the polling agencies. As any election approaches (Central/State) these must be the first to salivate and glee at the prospects of increasing their TRPs with all the election related programming in which the opinion polls and exit polls are now an integral part. So we will continue to see the much hyped exit polls packaged as with new improved methodology, bigger and improved sampling next time over. Again.

Years ago when the idea of Opinion polls and Exit polls got imported to India from the US (I guess) it was fascinating. As mortals, there is this tendency in us to jump the gun. Those trips to palmists, astrologers and soothsayers of different hues to know our Aane wale kal explain this tendency. Similarly we feel excited to know who will be our rulers before the actual counting is done through exit polls though it is just a few days ahead. But US and other western democracies from where these concepts originated, are less complex and more homogenous as a society. So calling an election after an exit poll with a very small sample size and extrapolating the results there is a less arduous task I guess. (Even there Exit polls have gone awfully wrong) Ofcourse India is another kettle of beef (😁) altogether. We are repeatedly told that we have religion based voting, caste based voting, community based voting and what have you. But one thing which is missed in all this “______based voting” which the pollsters and analysts keep talking about is the New Indian voter’s “Brain based voting”!!!

So the next time may be the pollsters should just identify if a respondent is a core or a non-core party voter and record to which party he/she voted instead of spending too much time if respondents are upper caste or Dalit or Maha Dalit,..,.. In which case, they will be in a better position to forecast how the actual swing is and save those eggs on their faces😜