This Diwali, Soorarai Pottru meaning ‘Praise the Brave’, a much awaited Tamil film finally reached the audience. With theatres barely opening up few days ago amidst myriad Covid restrictions, the makers took an early call to go for an exclusive OTT release instead of a mega theatrical release. The film is based or rather inspired by Capt. Gopinath’s book Simply Fly which is his autobiography. However it is not a true biopic on Captain Gopinath whose calling card has been that of being the pioneer of low cost Aviation in India. The book Simply Fly which I just quickly glanced through in the last couple of days traces his life as a diligent child to his brief stint with the forces and then turning an entrepreneur with Deccan Helicopters and finally achieving his dream of building an affordable airline for the masses by launching Air Deccan. In the book, he outlines the travails in this journey which is certainly inspiring. 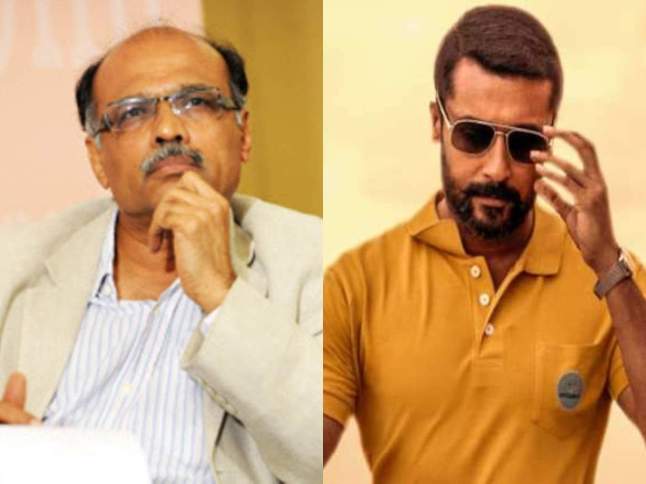 Unlike films that are released in theatres where the reception could be gauged by the Box Office numbers, for OTT releases, one has to just go by the buzz the film creates in the media and in particular Social media. So by that gauge, one must say that Soorarai Pottru has opened to positive reviews from critics and a rousing welcome overall from general audience.  At the same time, it has also drawn a huge flak particularly on Social media.

The brickbats for the film are around the way Captain Gopinath’s role is portrayed which has triggered a social media storm, if I may say, in the tea cup. The major angst is over portraying the main protagonist character played by actor Suriya not as an upper caste Brahmin which Gopinath is. In the film, the character goes by the name Nedumaaran Rajangam and is shown as belonging to the under privileged class.  The question which has been raised is, why twist the facts while basing the story on a real life individual, Captain Gopinath in this case. What’s wrong in show casing the story of a struggling upper caste individual, is the follow up question.

Here’s the thing. A biopic by definition is a film that shows the life of a person typically a public or a famous figure. A biopic follows the true life of the individual and the screen play is around actual events that took place in the person’s life. This means that such a film portrays real characters of not just the main protagonist but also others who were part of his or her life. The names are real, the time lines are accurate and reflect true events. Examples of biopics are Richard Attenborough’s Gandhi and in the recent past M.S.Dhoni based on the popular cricketer.

In a biopic, it is assumed that the makers have done enough research to portray true events based on the individual’s life and therefore must be ready for factual scrutiny. There is little or no room for creative liberties on facts that matter. Even here, based on real life incidents, film makers do resort to a bit of dramatization for effect.

On the other hand, a film like Soorarai Pottru is NOT a biopic on Captain Gopinath. It is a film that is based on his life as depicted in his book – Simply Fly. That’s all. Like how, many films are based on novels, this one is based on this book. Having bought the filming rights for the book, the makers do have the right to exercise their creative liberties to flesh out a script that can be made as interesting as possible.

Cinema is commerce. Film making apart from being an individual’s artistic pursuit, it is also business. It is an industry where there is investment and Returns On Investment. So, naturally the makers would like their films to get a reach that is as wide as possible and make them blockbusters. In that pursuit, if showcasing the protagonist to be from an under privileged class makes it more dramatic and more relatable to a wider audience, I don’t see anything wrong. Again my point is, this is justified if the film is not a biopic and is just based on some one’s life. Mani Ratnam’s Guru is loosely based on or inspired by the life of Dhirubhai Ambani but it is not a biopic on Dhirubhai. And hence we saw the many deviations and added drama in the script.

Recently, there was a Hindi film by name – Gunjan Saxena – The Kargil Girl that was released and had its own share of controversies. This film is based on the real life of Gunjan Saxena an Ex-IAF pilot. Here the problem was, the makers while calling it a biopic took too much creative liberties whereby the IAF was shown in poor light. The film also was not factual in its depiction in many aspects. So, the panning of the film was justified.  The case of Soorarai Pottru is different from Gunjan Saxena in my opinion.

Inserting a card that the film is inspired by true events and any resemblance to real life characters is purely coincidental is the maker’s way of taking anticipatory bail from probable trolling.  But, even that didn’t help in the case of Soorarai Pottru.  The makers over marketed the Captain Gopinath aspect while they completely changed the story. I also feel that they should not have used the brand ‘Air Deccan’ in the film.  But for these small issues, I don’t think the outrage over the film by section of the audience over twisting the facts regarding Captain Gopinath when it is not a biopic, is justified. Soorarai Pottru is the story of Nedumaaran Rajangam BASED on the life of Captain Gopinath and NOT the story of Captain Gopinath himself. And that’s a huge difference.

Post script: Captain Gopinath himself watched the film and he seemingly did not have any problem in the way the film has come out.