For few years now, Aamir Khan has been making December his own.  This year has been no exception. His latest film Dangal is well on its way to smash his own records at the Box office. The day the film opened to some positive reviews, the world’s most productive factory and the most efficient distribution channel today namely the “forward factory” and the “WhatsApp channel” got busier than usual. Some of the forwards were rants comparing the position taken by the Aamir as the protagonist in his earlier film – 3 Idiots and now in Dangal. In 3 Idiots, Aamir was shown taking a dig at the typical mindset of Indian parents who don’t let their children follow their dreams. In Dangal, as a father Aamir completely takes charge of his daughters’ destiny to achieve “his” dream of winning a Gold medal for India in Wrestling. In whole of the film there is no evidence of him trying to find if his daughters share his passion! Be that as it may, this post is not about those films or of Aamir’s so called double standards as espoused by social media.

On the 1st day of a New Year when one is generally in a contemplative mood regarding chasing one’s dreams and passion,… the contrasting but at the same time practical themes of these 2 films of Aamir set the tone for this piece.  In the context of following one’s passion in career and life few pertinent questions arise:

These are complex questions with no easy answers. Hence the “Passion Paradox”! Only in an ideal world would we have all folks chasing their dreams and following their passion and be contented in life. In normal world for most, it’s an elusive chase as if you are on a tread mill!

For a lucky very few though, the passion thing falls in place nicely. They are lucky enough to identify their passion at a young age. Possess adequate talent around it. Have a supportive ecosystem at home. Exhibit a relentless drive to achieve their goals. Blessed with a bit of destiny supporting their cause to be among the best. And get handsomely rewarded for the same. Aamir Khan for example. Or a Sachin Tendulkar. But such examples are few and far between. I am sure even for Sachin there would have been days when he felt like running away from Cricket with the kind of pressure he was subjected to!

And there are some who get to pursue their passion at work on a day-to-day basis and also get paid for it. Something like what actor Kamal Haasan said of his life – “I have no complaints as I get Karumbu thinna kooli”!!! (Getting paid that too to eat Sugarcane). Or a musician for example. Even here, a passionate pursuit when it becomes an everyday battle with deadlines – it becomes a rut isn’t it??? As film critic Baradwaj Rangan an engineer by profession who incidentally left an IT career to pursue his passion of writing aptly puts it, “that following your passion, your dream, is fine, but just keep in mind that one day it becomes a job. No one tells you that, one day, the passion becomes the daily grind!!!”

So where does that leave ordinary mortals like us who don’t fit in the above 2 categories?

Here’s my personal views. Of course to each his own.

I feel that understanding one’s passion in the late teens is only “luck by chance”! For most that is a very confusing period with limited understanding of their own interests, strengths and an idea of what they want from life. As we evolve, so do our interests. So for many we get to understand our passion rather late. Having understood what gives us that inner joy, even if it’s not early in life or even if it’s not on full time basis, it is good to pick up that interest and pursue it.  This pursuit in parallel to the regular job could be indeed liberating. It could provide an exit to the everyday grind.

I do believe that unlike the previous generations, this generation and the coming ones are better placed for pursuing all sorts of dreams and passion. With more exposure comes more options and more understanding of what’s in store.  They could hopefully fit in more in the 2 categories I have mentioned. And hence less of this “Passion Paradox” for them! Or so I hope!

While on this, a big thanks to Aamir who wears passion for films on his sleeve and keeps churning out meaningful cinema while reminding us of following our passion 3 Idiots style or Dangal style!!!

On that note, my thumbs up to all to follow your passion and chase your dreams in 2017. Cheers!

For this time of the year, the temperature in the last few days in Mumbai has been few degrees higher than normal.  One tends to attribute the same to the usual suspect called “Global Warming”.  But I suspect that the higher temperature this time overall is due to the “Exam fever” every house hold is seemingly suffering from – these days!  In India this is the season for the SSC (10th) exam and the “life threatening” HSC (12th) exams now and my best wishes at the outset to all the students who are going through the rigmarole.  Absenteeism in companies is at a high as parents take leave in turns to be with their kids and provide moral support as they prepare for the ‘board’ exams.  Film makers who aspire to be in the 100 Crore club avoid release of their movies in this tense period.  In these highly competitive times, board exam times are becoming “testing” times for the parents, grandparents and the ilk.

I’m not sure if this aura around ‘Board’ exam is only in India or it is a universal phenomenon. India made a 1st step towards easing the burden on students when Kapil Sibal, the then minister for HRD, made the board exam for 10th standard an optional affair from 2011. I’m not well-informed on how this optional thing works or doesn’t work.   However the tyranny of the board exam continues for 12th Std to this day.

I have vivid memories of my tryst with board exams which started with the 10th way back in 1983. In our predominantly Hindu – Brahmin school in Trichy (by name E.R.Higher Secondary School), the hall tickets were handed over after a puja at the temple. On the appointed day, all the students and respective teachers of the 10th class were taken to the temple for the Puja. My neighbour and friend who used to be in a Catholic school said that in their school, the hall tickets were handed over after a prayer at the church. So I concluded that all religions took board exams seriously and board exams by nature were secular!  By the time I came to 12th there was no need to take the walk to the temple for collecting the hall ticket. The school by then made strides and collected enough funds to build a small temple within the school premises itself.  To take care of the Saivite and Vaishnavite sensibilities or rather their academic aspirations, the temple was built with 2 presiding deities – Ganesh and Hanuman.

In a neighbourhood Ganesh Temple the priest – an old pious man would give us specially worshipped ‘vibhudhi’ individually to each of us to be applied just before we open the question paper.  During exam time, he reminded us kids not to forget to collect the same before the exam begins and we did so religiously.  As quaint as it may seem, the lines to collect this ‘vibhudhi’ from him were quite long during board exam times with even non regulars to the temple queuing up.  That the old man was carrying out this practice without expecting any monetary consideration is in stark contrast to the materialistic world of today.

As soon as the 11th exams were over, the preparation for 12th started.  The idea was to start early and complete the portions by Dec. In preparation for the 12th board exam in April, the classes get over by Dec and the next 3 months one is at home to prepare for the final kill. I must admit here that though the board exam fever was running high, we were quite relaxed and taking it easy.  So much so that we didn’t resist watching the entire “Benson & Hedges World Championship of Cricket” which took place in March 1985 in Australia.  Following the World Cup win in 1983, India continued its winning stretch in One Dayers beating Pakistan in the finals in this tournament.   Watching almost all the matches live on TV with mates that too at a friend’s place and rooting for India bring back unforgettable memories. Ravi Shastri became a (to borrow today’s vocab) “hash tag” overnight after being crowned as “Champion of Champions” in that tournament and ‘Audi’ got into the lexicon of the Indian youth.   Looking back I realize that this tournament provided for a much needed break in between our continuous study routine and acted as a stress buster.

While one starts getting into the trappings of the board exams – the refrain all around is “prepare well for this one last time, get good marks and you are set for life”!!!  But the truth is far from it. The competitive rat race of life continues post the board exams as well.  Only that you start getting used to it!!! The jury is still out on whether academic excellence matters at the end of the day and is the passport to success. As somebody said, academic excellence may well provide you the “Passport” but you still need the “Visa”!!!

It is nobody’s case that there is no need for an assessment in the form of an exam. It’s just that a complete focus on one final exam puts so much pressure and one bad day in office or rather the exam hall can put paid to an aspirant’s career hopes in today’s system. A movement to a continuous and regular assessment is the way forward.  Can our pragmatic and hardworking minister Shashi Tharoor ring in a change ???

On a Sunday as I am writing this post, my six year old daughter is quite engrossed in the movie “3 Idiots” for the “N+1”th time.  As the main protagonist Aamir Khan launches his diatribe on the present education system which gives so much weightage to marks and marks alone, I’m not sure if she realizes what’s in store for her. I hope by the time she is in her 10th, the so called ‘board’ exams have lived their lives and have been consigned to history.  The selfish thought being we as parents will be freed of the ‘board’ Exam fever!!!

Let me close this piece now as I have to rush my daughter to the dance class for well ………. an exam 🙂 🙂 🙂

Postscript: If people who are in Twitter are “Tweeples”, people who suffer from Exams are “Examples” 😦 😦 😦 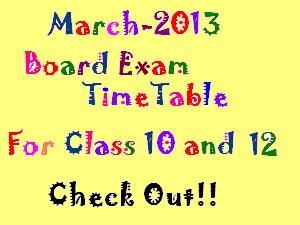