“Change is the only thing that is constant” is an oft repeated phrase that has now become a cliché! In a real world that is not Utopia, the only thing that is constant is resistance to change. “Where are the big bang reforms?” This was a familiar question from the commentariat in the first few years of the Modi Sarkar. Then when the Sarkar started implementing reforms of the big bang variety, the question changed to “Why is this needed now?”. We saw this when the much-needed reforms in the agriculture sector were introduced. Finally, the government had to roll back the same. In my blog (read here) when the farm bills were repealed after protracted agitations, I had written on the lessons for the Modi Government in bringing in reforms. There are more lessons coming up!

Here we are, again in the same boat. The Government announced Agnipath, a scheme that brings about radical changes or reforms in the recruitment of jawans for the armed forces. And post the announcement, we have been seeing the same scenes playing out in terms of agitations and approach of the government. Literally speaking Agnipath has set parts of the country on fire, and this is extremely unfortunate.

Most commentators and domain experts acknowledge the need for these reforms. Yet, the section of the population which is supposed to benefit from these have an angst towards these. The result is what we see playing out on our respective screens.

From whatever I have seen and heard on this issue, the biggest issue around the proposed Agnipath program is the timing.  For the past 2 years, due to Covid, recruitment to Armed forces through recruitment rallies have not happened. The process is at different stages and the candidates are going through an agonising period of prolonged suspense, frustration and at the end of the day some hope.  Aspiring candidates are at different stages in the process – some awaiting their medical, some awaiting the final letter, some at different rounds and so on. So, all the while they have been forced to keep themselves fit and ready for the process to come to an end now that things are getting back to normal post Covid.  All along the candidates have been given the reason of Covid for the delay in the process.

Now comes the announcement of Agnipath which totally puts paid to their hopes of not just joining the services that will ensure a settled life but, a 3/4th probability of getting out of the services and start all over again in 4 years. What we see as raucous demonstrations are a result of the pent-up frustration in the first place due to last two years of agonising wait and second now finding that the game has changed.

If one must look at the causes therefore for this unrest, they can be summarised as follows:

Having said all this, since the proposed reform packaged as the Agnipath scheme is much needed for reducing the average age, reducing the pension budget, shifting the allocation from boots on the ground to weaponry, technology and sophistication, the government must stay the course but probably with a few course corrections.  Here’s what the government could have done in rolling out this program and probably it could still do:

Though some of the commentators particularly from the services feel that this should not be seen as an employment generation program, the fact of the matter is, in India there are districts in states like Bihar, Eastern UP, Bundelkhand, Haryana to name a few, where getting into the forces at the sepoy level is a primary source for employment for the youth. This explains the reason for the skewed nature of the protests and outbursts as far as geographic spread is concerned.  The irony is, what probably started as spontaneous outbursts which resulted in destruction of public property at will has now turned into a more orchestrated campaign to create unrest in the country.  Nupur Sharma issue is now history!

By going full fledged with the announcement, the government has put itself in a quandary and the program in jeopardy. Now coming out of the hole and still roll out Agnipath even with some changes will be a real Agnipariksha for the government! Hope this doesn’t go down as “Agnipast”!

Nalinakanthi is one of the most mellifluous ragas in Carnatic music. In Carnatic music, there are only a few compositions in this raga, the most prominent one being Thyagaraja’s Manavyalakinchara… In film music though particularly in Tamil and Malayalam, this raga finds wider usage. Further, among avid followers of Tamil film music, Nalinakanthi has been immortalised by none other than Ilaiyaraaja with his use of this raga in the song Enthan nenjil neengaatha… in the film Kalaignan.  Composer Deva’s Manam virumbuthe… and Rahman’s Kandukonden Kandukonden… are the other songs in Tamil films that followed using Nalinakanthi phrases that became hits.

Of late, I notice that even those who probably haven’t learnt Carnatic music, have now started to refer to the usage of ragas in Tamil film songs. This includes me as well.  Watch this clip at 21.57 where a Raaja song is being discussed, for example and the interviewer pops the raga name casually.  I attribute this to the increasing discussion on Raaja’s use of Carnatic ragas in his songs in the media by experts.

It’s not that Raaja started using Carnatic music only of late. In fact, he has been using Carnatic ragas and references right from the 70’s. The song Chinnakannan Azhaikiraan… from the film Kavikuyil of 1977 tuned on Reetigowla raga by Raaja is a testimony to this.  Just like Nalinakanthi, the credit for making Reetigowla very popular in Tamil film music goes to Raaja. It was then taken forward by other music directors like Rahman, Vidyasagar, James Vasanthan and others later with some memorable songs.  But it is only in the last couple of years that Raaja’s effective use of Carnatic ragas in many of his compositions more directly or subtly has started coming out. I would attribute this to what I called in my earlier blog (read here) as the LCS (Lockdown-Connectivity-Social Media) Trinity!!!

Thanks to this trinity, we are now exposed to so many Carnatic exponents explaining eloquently on how Raaja has used different ragas in many of his songs. Foremost that comes to my mind is Subhasree Thanikachalam’s QFR (Quarantine From Reality), a YouTube based show that is immensely popular. Though I must say that this program is not just to do with Raaja’s songs, Subhasree talks about the nuances of many of Raaja’s hits including the usage of the ragas in his songs.  In fact, as a tribute for Raaja’s birthday few days ago, Subhasree along with her team of singers and musicians presented a medley of Raaja’s songs interspersed with the Carnatic raga phrases they were based on.

The other thing that comes to my mind next is Do you have a minute series? by the famed Veena Vidwan Rajhesh Vaidhya. In these 1 minute clips, he has been playing many Tamil film songs with the details of the raga mentioned as captions. Again, this series is not just limited to Raaja’s compositions, but a cursory look will tell you that it is Raaja’s songs that are often covered.

The crowning glory in my opinion for popularising phrases of different ragas and their usage by Raaja goes to Carnatic vocalist Sanjay Subrahmanyan. Starting during the Covid induced lockdown in 2020, week after week every Saturday Sanjay, a self-avowed fan of Raaja, in his own inimitable style, releases a clip titled Short Notes where he sings a raga phrase and ends with a hint of a Raaja song in the same raga. Now, this has got its own fan base including yours truly. On Saturday evenings, I eagerly look forward to this clip which is posted on different social media platforms. Guessing the song is one part of the thrill. The other part is of course coming to know of Raaja’s repertoire in Carnatic music week after week. Not to forget the discussions this weekly fix triggers in WhatsApp groups. If this is not a commendable attempt in mainstreaming Carnatic music what else is?

Amidst all this, what the Carnatic duo of Ranjani-Gayatri managed recently is laudable. To coincide with Raaja’s 79th birthday, they did a concert at the hallowed Music Academy last week titled Raaja by RaGa. In a regular kutcheri format, they sang hand picked film songs of Raaja that are based on Carnatic ragas. In the sense, it was a kutcheri exclusively of compositions of Ilaiyaraaja, in a novel attempt to celebrate the genius of Raaja. I didn’t watch it unfortunately though I would have loved to. But I watched this video in which the host Priya Parthasarathy gives a nice recap of the whole concert and needless to say, there are quite a few goosebump moments.

The thing is, Raaja has been using along with other music forms, Carnatic music extensively in his compositions for a long time now. But all these years, as ordinary listeners, without experts explaining the same, we never realised or understood the extent of Raaja’s proficiency over this form.  Therefore, I think that attempts like the one by Sanjay or RaGa sisters do a great job in dispelling the long-standing notion that Carnatic music can be understood and appreciated only by a niche audience.

I think that the recent concert by Ranjani-Gayatri at the Academy where they did a full-fledged kutcheri with just compositions from films is a first.  The moot question is, following the huge response to this, will we see Carnatic musicians mixing up film songs based on Carnatic ragas in their concerts? I hope they do. I still remember the thunderous applause Sanjay Subramanyam received when he threw the Ilamai itho itho… phrase in between a Carnatic song on the New Year Day concert at Krishna Gana Sabha in 2020 or for that matter the huge appreciation when Sid Sriram sang Maruvaarthai… as a thukkada in a Carnatic concert in Mumbai recently. 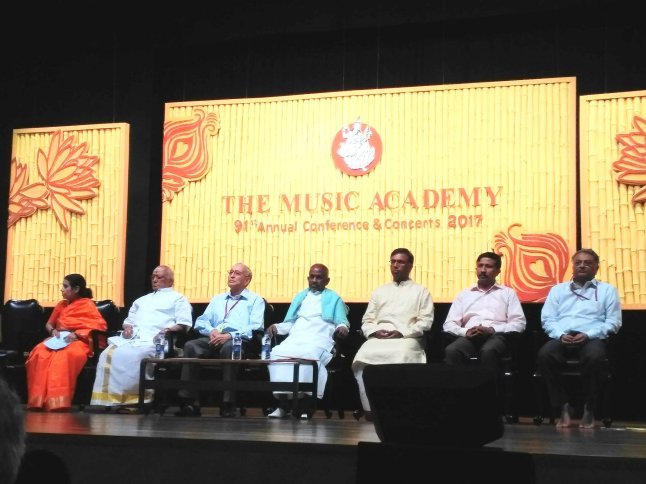 Chamber Welcomes Thyagaraja is one of the compositions from Raaja’s fusion album – How To Name It? of 1986. Raaja uses phrases of Kalyani Raga as a metaphor for Thyagaraja and notes from Bach in this fusion piece. This I guess was his way of paying a tribute to both Thyagaraja and Bach and trying to find equivalences in music forms. In the year 2017, the Academy in short for The Music Academy, Chennai welcomed Ilaiyaraaja to be the President for the Annual Conference and concerts during the “Season”.  It’s now time for the Academy to bestow the much-revered Sangeeta Kalanidhi title on Ilaiyaraaja in the coming year. Sangeeta Kalanidhi at 80 may be late but still is great!