As 2018 winds down and we step in to 2019, for India, it is just not another new year. Mid of 2019 is when we will have the Lok Sabha polls that will determine if Narendra Modi will get another shot at being the Prime Minister. In my memory, I cannot recall of any individual who has come for so much scrutiny as an elected representative. And whose re-election is being discussed and debated so intensely in the country. First up, blame it all on the social media and its growing tentacles!

The fact that a government’s performance is coming up for such a rigorous appraisal itself, augurs well for our country. It should be like that. I only hope that this appraisal business isn’t selective and not just reserved for Modi Sarkar! If I think as to why this government has come under such a close assessment, I realise that it should blame itself for the same.

Did we have any other government in the past that

Set targets for itself on many fronts?

Which announced the targets and put them out in public domain?

Which tracked the actual delivery against the targets and presented them for everyone to see and comprehend easily that too mostly on real-time basis?

Today we know, not just what this government’s targets are for rural electrification, construction of highways, building targets, opening of bank accounts so on and so forth but also where it stands in terms of achievement. One look at the https://transformingindia.mygov.in/performance-dashboard/ site gives us an update on a real-time basis. It is not that governments in the past did not set targets for themselves. But all these targets were usually in terms of outlays announced in the Annual Budget speeches and seldom one would know what the final outcomes were. Between the outlays and outcomes, the India story remained in tatters. I guess not any more.  So, if people keep remembering the promises made and get disappointed if some of the promises have not been met fully or adequately, blame it on the Government’s efforts of putting out data in the open which makes it possible to compare achievements Vs goals easily.

In comparison to the upbeat mood in 2014 and 2015, today the mood in the country is more sombre. Even the most loyal fans of Modi have realised that probably he chewed more than what he could swallow. Five years are just not enough to turn around and solve all the ills of the country. That too when the global economy is facing one headwind after another! But then, as a country we had our own share of misses. Right when the economy was getting back on track in 2015/16 from the throes of policy paralysis and negative vibes and was poised for a leap, this government let loose the Demonetisation devil on the economy.  This set the economy back by 2 years to get back on track. That we didn’t fully collapse and managed to grow the economy at a slower pace nevertheless, would be a miracle, academicians would pore over in the years to come!

Before the effects of Demonetisation could subside, this government went ahead with the introduction of GST which according me is the biggest Tax reform in Independent India. Irrespective of the critics who take on this government on the “not so perfect” GST, I maintain that it was extremely creditable on the part of Modi Sarkar to launch the GST without further delaying, on the 1st of July 2017. In India, in aspects of meeting deadlines, we Indians follow religiously and rigorously the Theory of Elasticity which says solid materials deform under the application of external force and regain their original shape when the force is removed. So, in the quest of a perfect, ideal GST, if this government had deferred the launch, who knows, perhaps we will still be talking of “introducing the GST” in the upcoming budget!  Against that, today we already have a thriving GST which is now going to complete 2 years! The introduction of GST will remain this government’s biggest achievement when its history is written.

The short term pains inflicted by these 2 moves (Demonetisation and GST) to the small and medium businesses combined with the government’s failure to address the Banking crisis at the beginning of its term have led the BJP to the situation where it is today.  In its strong hold states like Gujarat, Madhya Pradesh, Chhattisgarh and Rajasthan, the party’s support base has been dwindling. On the contrary, the Congress which seemingly had no hope of a revival till mid-2017, has smelt blood and is hoping to deprive Modi of a second term and a shot at history.

In India today, in the main stream media and also probably social media, the obituary of Modi Sarkar is being written on a daily basis. As per me, it is too early to write off Narendra Modi in the context of 2019. In spite of his government’s misses in terms of promises and more importantly the delivery of Achhe Din, his personal credibility as a leader who is keen to deliver, is intact. I do believe that there are those who are disappointed with him. But they are still not disgusted with him. Yet.  My personal feeling is that they would like to give him another chance.  The same states which voted out the BJP recently could very well see voting for Modi in the Lok Sabha polls! 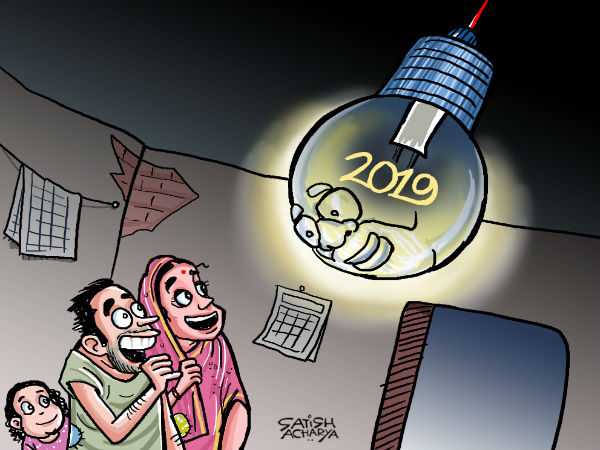 Apart from this factor of Modi’s personal charisma, there is another important factor at play. People like to call it the TINA (There Is No Alternative) factor. I don’t believe that there are no alternatives to Modi. In fact, we have many. We have the spectre of a Rahul Gandhi becoming the Prime Minister, if a Congress led UPA front emerges as the biggest. Or else it could be toss between a Mamata Banerjee or a Mayawati or a Chandrasekhar Rao or any other leader depending upon how many seats they win, as part of a coalition which will be cobbled together post the elections. In all these cases, a leader of the party with 30-40 MPs would head the coalition of 10-15 parties with each party playing the “I am indispensable” card!

This Mahagathbandan where, parties will oppose each other in one state but will come together in another state is only a Maha”cut”bandhan who want their share of power and the perks that come with it. I believe that people are smart enough to understand and realise that Modi Sarkar might have disappointed but will still probably vote for him not because of TINA but being weary of TAIL – The Alternative Is Lousy!

In the past, we saw many Accidental Prime Ministers as we didn’t sight TAIL properly! Hope 2019 is different. On that hopeful note, wishing India a momentous 2019!