Even since Donald Trump became the President of America in 2016, Facebook has been in the news. Almost for all wrong reasons. One being its alleged or now almost certain role in influencing the US presidential elections. On the one hand, is the allegation that Facebook used its staff to curate content on its news feed section so that Pro-Trump content were suppressed. On the other hand, is the role of Russian agents and the now infamous Cambridge Analytica working to promote Trump with targeted posts based on Facebook users’ profiles. In many countries including India, there has been a clamour for Mark Zuckerberg’s head for letting Facebook become a propaganda tool increasingly.

Consequently, we saw Zuckerberg being grilled live during the Congressional disposition over Right to Privacy, misuse of Data, Cambridge Analytica’s role,… What a climb down for a person who was once touted as the founder of the most wonderful thing on earth called Facebook since the Telephone! A platform which helped people across the world connect seamlessly.  A medium to make the world more Open and connected! A platform for sharing content without owning, creating any of it. A major disruption in the way we communicated! 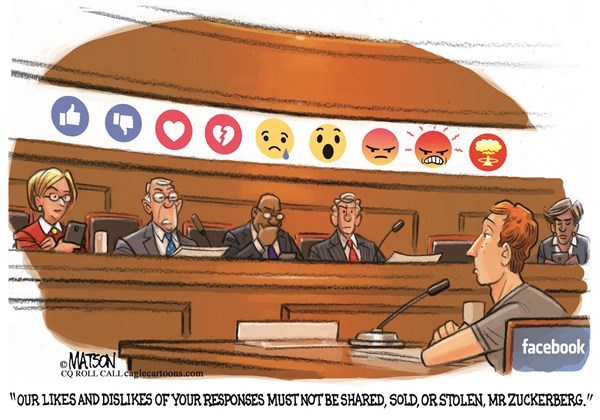 Yet, all that is forgotten now when more and more facts emerge on the way Facebook handles our personal data. Today, Facebook has become one of “mindless disruptions” as someone said! To be fair to Zuckerberg, when he and his friends at Harvard conceived of a platform just to share profiles among Ivy league colleges and then scaled it up to a medium for connecting people, he would not have imagined that a day would come when he would be summoned for questioning by governments on the role of his medium in influencing elections in their countries! This could be added in the list of “What they don’t teach you at Harvard Business School”, by the way! Even in a not so internet savvy country like India, today we are discussing if social media like Facebook, Twitter and WhatsApp played any role in the recent elections!  How did Facebook a hook then for pulling in and connecting people become a Crook now?

It’s clear that what started off just as a medium for connecting people ceased to be just one. Like other start-ups as Facebook grew, I am sure the usual question – “What’s the revenue model?” became overarching in terms of expanding the scope of the platform and looking at ways and means to monetise the same.  And once the IPO bug bites, as it did with Facebook in 2012, the urge to beat quarter on quarter numbers takes over. Then it becomes a matter of coming up with new ideas like using tools to analyse user profiles and sell to advertisers who can then use that for targeted messaging. And don’t all of them love this? Targeted messaging!

Also many times it happens that a manufacturer or marketer introduces a product for a particular purpose for a certain target Audience while consumers by themselves find other uses for the same. A great example which is part of marketing folklore is Johnson’s baby shampoo. J&J, the company intended its baby shampoo to be mild for use on babies. Research then revealed that the same product was being used by mothers too as they also preferred soft and mild shampoos! Similarly Facebook I’m sure, must not have realised that their platform which was intended for users to share updates in their lives, pictures, personal videos,… will be used for spreading hate messages! Or used to spread fake news. But unlike J&J which I don’t think capitalised on its findings by introducing a mild and soft shampoo meant for adults, probably Facebook played ball. It might have unwittingly or otherwise turned a blind eye to this trend of individuals/groups/organisations with vested interests making Facebook a platform for propaganda!

And we have the language issue! Just in a country like India we have so many languages in which we people converse and write. Can the AI powered bots and tools who keep sifting through terabytes of content isolate fake and propagandist news that keeps appearing on timelines of users?

It’s surprising that Zuckerberg and his team in Facebook waited till shit hit the fan! As users, we all are guilty of the fact that we accept terms and conditions mostly without reading and we don’t care so much to check the privacy settings or any changes thereof. I was surprised to read recently that Facebook has been listening to its users since 2014! And then realised that the microphone setting under Facebook on your phone should be turned OFF if you don’t want Facebook to listen to you!

Having now seen how Facebook deals with our personal data and our activity, should we shun Facebook? Right after the storm, #DeleteFacebook was trending and one saw many announcing to the world that they have quit Facebook. I think just like all aspects of technology, Facebook comes with its pros and cons. Just like say a smart phone. It depends on how we want to use the platform.

Recently Facebook announced that it has tied up with a local fact checking site called Boom live for Karnataka elections. This is seemingly in line with Zuckerberg’s commitment that Facebook will do all it can to “maintain the integrity of elections” in different countries including India.  While this could be a baby step in the right direction, I still feel that in a country like India more than Facebook, its cub WhatsApp is the monster in the room!

I think it makes enormous sense to be discreet on what we are sharing on Facebook or for that matter any social media.  And it doesn’t make sense to click, watch, like, comment or share many of the propaganda videos which keep surfacing in our timelines.

But as far as this piece is concerned you would realise that it’s neither propagandist or manipulative. So please do hit 👍, comment and share in all platforms as much as possible😀😀 Thank you!

An Idli a Day!

30th March, we were told is being celebrated as “World Idli Day”! Meaning, for the world, 30th March is Idli Day! For South Indians in general and Tambrahms in particular though, every day is Idli Day you see! As Nanu mama said, “Ithellam marketing gimmick! Valentine’s Day, Women’s Day, Mother’s Day madiri! Namakku every day is Idli Day!” And he is probably right. “The” Idli is intertwined so much in the life and IDentity of a Tambrahm!

A day in the life of a Tambrahm is not complete without a brush with Idli! Usually the day starts with Idli as the breakfast.  Not only that, apart from having Idli for breakfast, I know of households who have again slight variants of the Idli for evening along with Kaapi and then for dinner as palahaaaram. 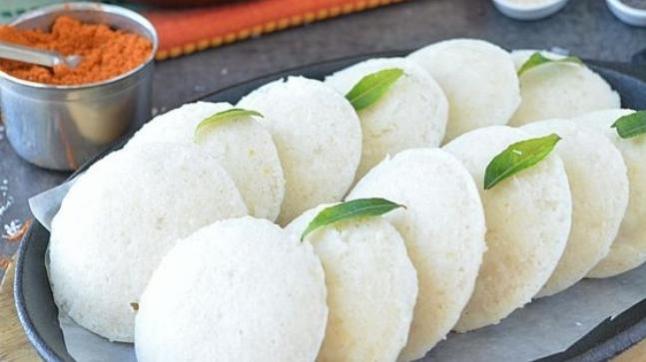 While Idli itself is a plain simple item made of rice, what makes it special is, what it is consumed with.  Tambrahm mamas who usually fuss around too much about food and the lack of variety every day, are more charitable as far as Idli is concerned. As long as Idli is served with different items to go with.

At a basic level, the day when the mami is in no mood to entertain the mama and kids so much, Idli is made and will be eaten with the already made Molaga Podi mixed with nalla ennai aka Gingelli oil! And the nalla ennai is poured over the Idli as well to taste!

At a next level, Idli is taken with Chutney. Here the options are many, starting with white Coconut Chutney, Tomato/Onion Chutney, Green Chutney,..,…

On a particular day, if the mami decides to finish the cooking in the morning early, then one can have the baakiyam of having Idli for breakfast with Sambhar which can be then used for lunch as well with rice!  Idli with Chutney “and” Sambhar is usually the combination for Naallum, Kizhamaiyum!

Now, here’s the thing as a matter of critical detail. If you eat the Idli dipped in Sambhar served separately in a kinnam, it is Idli Sambhar. But, if you take a bowl of Sambhar and soak the Idli in it and eat, it becomes Sambhar Idli!  Usually left over Idlis of the morning along with left over Sambhar of afternoon – becomes tasty Sambhar Idlis for evening tiffin!

Before the IRCTC era, train journeys or road trips (read as temple visits) were never complete with Idlis being part and parcel of the trips literally, I mean. A separate koodai accompanied these trips with eco-friendly disposable packets of Idlis. And here’s the twist. To save time and the mess of eating Idlis with Chutneys or Sambhar (which may get spoiled in the heat) while on travel, Idlis are usually packed with Molaga podi and ennai already applied on them. So white Idlis become slightly Orangish in colour with liberal dose of nalla ennai. “Konjam ennaiya dhaaralama vittukko, nenja pidikkaama irukanum!” This Idli with pre-mixed Molaga podi becomes “Podi Idli”! Have you ever tried having a sip of hot, filter coffee right after eating this Podi Idli, with the taste of Idli mixed with the Molaga podi still lingering on the tongue?? If not, please try that tomorrow!

“Idli, malli poo madiri irukku!” can be the ultimate compliment which is when the Idli is soft, pure white in colour and has a nice aroma around it!” However ask any mami and she would say, “Aamaam, kudikarathu ennamo Aquaguard thanni. Aana Idli mattum  malli poo madiri irukanum!!!”

Coming to Tambrahm obsession with the Idli, though we eat Idlis probably 365 days of an year at home, when we go out to eat at restaurants,…, the 1st choice of most mamas is most likely to be “Oru plate Idli Sambhar”!

In Tambrahm households, it is also common for parents to serve Idlis with Thayir and Chakkarai mixed for kids. “Thayir vayathukku nallathu. Eriyaama irukkum!” Our elders were abreast of all this probiotic stuff even then! But what usually starts as a childhood habit continues even after growing up.

Even Doctor mamas have a special affinity for Idlis. Usually, when we used to go to our neighbourhood family doctor for common ailments like fever, stomach upset,..,… the doctor usually advised, “Usual pre-cautions and “Idli madiri safe food da saapadalaam”!

In order to cater to the daily intake of Idlis at home those days, mamis usually arachufied maavu every alternate day even during the pre-grinder days!  In grinder days, more than the effort involved in aruchufying, the effort in cleaning up the grinder after the act was more taxing! Ithukku okkaandhundu araikarathe thevala! But today for the young generation, ready-made, Off the shelf maavu has come as a god sent relief. Only thing is, with the ready-made maavu one cannot be cock sure of the output!  Leading to jibes like this:

So, with the Idli even small travesties are not tolerated, you see!

The other bigger travesty of the Idli, is the invention of different varieties of Idlis in the name of fast food! From Idli Manchurian to Chinese Idli to Masala Idli to Hara bara Idli, …,… have all mushroomed much to the dismay of the Idli connoisseurs! For them, Idli is only one. Which is simple, steamed and safe! So for them, it’s not “Idli Day” but at least “an Idli a day”!!!