In these largely agonizing days in India, a call to savour the Achhe Din would seem highly preposterous, isn’t it??? Well, wait a minute!

In all the above, one can notice that while the provocations are different – from a leader’s killing to another leader’s own demise to a political move to demolition of a religious symbol to an adverse Supreme Court judgement that too in different parts of the country, the reaction of the people followed a pattern. Violence, looting, mob fury, vandalism,…,…. leading to many deaths and large scale destruction of property.

This proves that as Indians we are a bunch of gullible emotional people. We can get easily provoked into carrying out what are supposedly unlawful activities that bring disrepute to the country and also affect us economically.

In any country’s timeline there are defining moments. Moments which change the destiny of the country for the good or worse. Our country’s history since Independence also is replete with such defining moments – some of them which we can be proud of and others which push our heads down.

I reckon that the Demonetisation call of 8th Nov, 2016 would be such a defining moment in our country’s history when it’s scripted later. I am not here to pronounce this based on the economic benefits of Demonetisation. The erudite are already doing it with media abound with pieces hailing and trashing the move in same breath. And frankly it is early days yet. However something else that is monumental is happening in the country which is what this post is on.

Going back to what I elucidated in the beginning of the piece, in our country we get easily provoked. And the result of the same is there for all of us to see. In this context let’s look at what’s been happening since that eventful address to the nation of the Prime Minister Narendra Modi on 8th November: 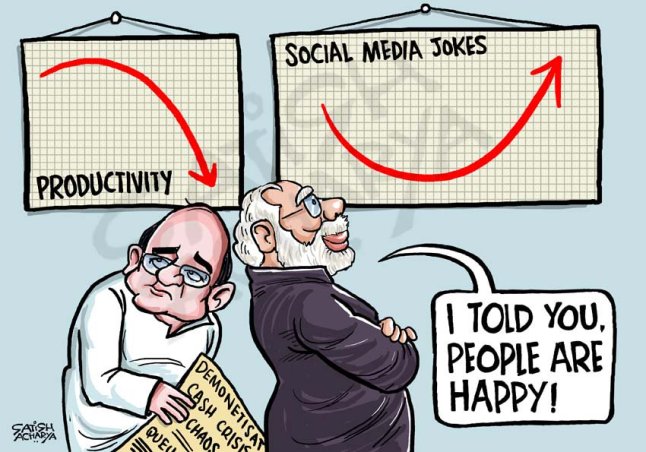 It’s almost a month now and still the situation is fluid. As one can see that this Demonetisation gamble by the Govt. has presented to us – public many, many opportunities to get provoked.  But the one difference is we that have not got provoked. At least up until now. And I hope I have not spoken too soon.

The resultant emotional outbursts leading to violent reactions for events mentioned in the beginning are sometimes quite spontaneous (though it is still difficult to explain the reactions so very violent) but many times orchestrated to further political interests. In this case (Demonetisation) also we have seen few political parties trying their best to spin things out of control and bring the Govt. on its knees. But just that this time around, few things have been different:

For the above reasons I would like to believe that the benefits or otherwise of Demonetisation notwithstanding, this move will emerge as a defining moment in India’s history – where the public of India completely toed the line of its Prime Minister, shunned the rhetoric of others, remained unprovoked and went through the grind.

I am not sure if we as a country will display such great maturity in reacting to unfavourable events in the future. But for now, let’s savour the Achhe Din!!! Shoba De in her today’s column calls 2016 – Annus horibilis! No, Ms. De – for this significant change in our public reaction, 2016 is in fact Annus mirabilis!!!