The feeling is almost the same. That feeling when India fails to win inspite of Sachin (or for that matter Kohli now) scoring a masterly century under trying circumstances in a second inning of a test match. Because others fail to do their bit of scoring a few runs required at the end or the bowlers failing to take the wickets in time.  The feeling after watching Lingaa, the latest outing of the “Superstar” was no different.  Rajinikanth in a dual avatar punches above his weight in the film but the story, the script, the director, the music and even the dialogues which lack the usual punch have let him and his fans down badly. Frankly Rajinikanth, coming after an illness which forced him to take a break from movies amazes with his energy and tries to lift the tiringly long movie from ruins. So cannot blame him if the film disappoints his fans but eventually it is his film and so the buck will stop with him I guess. The verdict was clear when my 7 year old daughter who doesn’t get tired of watching the many re-runs of Robot or Shivaji started pestering me as to when the interval would come :(.   Lingaa may still end up being a top grosser at the box office but would not end up in the echelons of Rajini’s best outings.

Most of Rajini’s films in the last 2 decades were based on a central template of “Riches to Rags to Riches (R2R2R)” replete with punch dialogues and other formula items. I hear that Rajini is very careful in giving a go ahead to a script and chooses his director carefully. So when directors gets a chance to make a film with Rajini as the lead, they first consider themselves very lucky. And while directing Rajini, they look at themselves as among his Numero Uno fans first and his “Director” later. So they invariably get conscious of the trappings around Rajini’s image and try their best to stay close to the central theme and the formula.  So whether it is Muthu, Baasha, Annamalai, Arunachalam, Padayappa or even Shivaji they all follow the “Rajini patented R2R2R2” leitmotif. It was a welcome relief to see P.Vasu in Chandramukhi and Shankar in Enthiran (Robot) deviating from the R2R2R theme and still emerging successful.

The question is how long is Rajini or his directors going to flog the same template? As long as it continues to work and rakes in moolah would be the answer I guess. But first with Kochadaiyan and now with Lingaa I feel that the fatigue is setting in. As we saw in Lingaa or for that matter a few years back in Baba (Rajini’s 1st unqualified failure in 25 years) just the Rajini factor may no longer be enough to sustain that Thalaivar aura. The script does play a role. So, what next for Rajinikanth?  As part of the barrage of unsolicited advice he must be getting day in day out, here’s mine.

Looking ahead, he could look at two other people in India who have similar stature and faced similar conundrums in life.

Comparing Rajini’s career with that of Sachin Tendulkar’s may be odious but may be worthwhile. I was always of the opinion that Sachin who carried Indian Cricket on his shoulders for years delayed his retirement from Cricket few years late. He could have retired much before giving us the opportunity to see his stumps cartwheeling against rookie bowlers. As the cliché goes, it is better to retire when people ask “why” and not “when”. Similarly for Rajinikanth it would have been better if he had called it a day after Enthiran. A film in which apparently he was not the 1st choice, but made it a humungous hit with a stellar performance thereby unleashing the larger than life “Rajini phenomenon” and ofcourse the myriad jokes. Director Shankar whose initial choices were Kamal Haasan and Shahrukh for the main leads resorted to Rajini after he realized that only he can make producers fork the mega budget that film called for. Signing off in style post Enthiran on that “high” would have been a fitting climax for an individual who was an outsider in the industry. Now that he didn’t, with Kochadaiyaan and now Lingaa, the conundrum for Rajini begins, I reckon. Decades ago when their careers were going parallel, Kamal started venturing into producing his own films.  I remember reading an interview where Rajini was asked if he will get into production. His answer that time displayed profound wisdom and maturity. He said that he was not keen on producing films because if the 1st movie becomes a hit, the temptation would be to make a bigger hit and if it flops, then the desire would be to deliver a hit. So he felt that it would be a bottomless pit and was happy just acting in movies. Well, I guess with his growing stature and compulsions he had to tweak that philosophy of his. But now I feel he should have applied that wisdom while signing up new movies post Enthiran.  Now that things have come to this head, he can look up to his friend and another successful individual Amitabh Bachchan and take some cues.

Amitabh a mega star and brand in his own right, these days cherry picks his movies and roles where he doesn’t have to play the main lead but where he can leave an impact on the role and the film. This way he is not weighed down by the expectations from a lead actor but at the same time is able to satiate himself of his creative urges and that of his fans’ unending appetite to see him on screen. One or two movies a year in cameo roles till his health and will permits could be a middle ground for the Superstar. 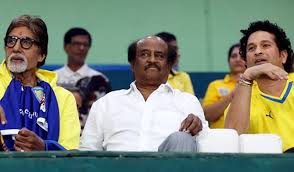 The moot question is, Can Rajini look at the above options?? Or will he dig into the R2R2R2 template yet again?? Only time will tell.  Well as the folklore goes, “If Rajini can’t, nobody can”. Isn’t it?