One latent benefit of the IPL is the opportunity one gets to see a good repertoire of TV commercials as marketers “bet” 🙂 big time on IPL to gain a bigger wallet share of the consumer during the vacation time and the summer season.  To me it is a good time to catch up with what’s happening on the Indian advertising space.  And that’s how this IPL season I stumbled upon a trend and thought its worth sharing. This has been cooking up for a while. Take a look (click on the links to view the TVCs) at the following commercials which have been hitting us during time outs strategic or otherwise:

And there were some more which appeared before:

Now you might have realized where I’m coming from. South India ofcourse.   Suddenly I notice that the story behind ads of many products across categories/brands revolve around Tamil Nadu/Kerala/Karnataka/Andhra and Madrasis as people in Mumbai like to address.  Like I observed in one of my earlier blog post “The Punching of Bollywood” – After the big screen, I think it is now the turn of  the ad industry to wake up to the South Indian coffee!!!

What could be the reasons for this “Kolaveri” (murderous rage) towards South oflate was my next look out:

Well, the actual reason could be a combination of all the above.

So be prepared for an overdose of filter Kaapi, Idli, Kaanjivaram, Appadi Podu,..,.. in books, films, ads, songs, videos, tweets and what have you!!!

Post script: Oh, I missed “the only reason” for this trend and how could I?? And that is

After all HE is from the South. HE sets the agenda and the World follows. Period!!! 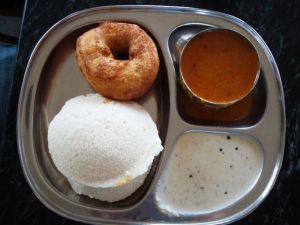 In this election season, you cannot be blamed for mistaking the title of this post for a war cry of one of the National political parties say the Congress or the BJP. I.e. to capture Karnataka today and India soon after. After all, as Karnataka votes today for its destiny driver for the next 5 years (hopefully), the ball has been set rolling for a string of state elections to follow and then the final Loksabha election mid next year i.e. if the present dispensation lasts its full term. War cry of a party is last of my bother. But, loud cry I keep hearing of the Mango people is.

I cannot but avoid sympathizing with my Karnataka friends as they brave the hot may be not so hot sun and exercise their democratic right today. What is the choice they have?

• Do they again vote and bring back BJP – which made a royal mess of its maiden Southern venture?? 3 Chief Ministers in 5 years, rampant factionalism and infighting, the honour of making “Garden city” a pitiable “Garbage City” today, Corruption charges galore, No governance… have made BJP a party with No difference.

• Do the people of Karnataka repose their faith on Congress – which must take responsibility for the lack of basic infrastructure like roads,… even after ruling the state for more than 50 years since independence? Is there a leader in Congress in the state who can make it happen in the “IT” State?

• Or they throw their weight behind Janata Dal (Secular) helmed by Kumaraswamy Gowda an Ex- Chief Minister himself. If Bangalore is sick and languishing at the bottom of the economic growth table, this secular party has to take fair share of the blame.

• Or finally will the Karnataka praja make my worst nightmare true? Is he actually readying to make Yeddyurappa of Karnataka Janata Party the King or a Kingmaker?

For the citizens, today is a stressful day. The choice they have is to choose the Best among the Worst. As a nation did we opt for democracy to choose the good among the rotten? No wonder there is so much apathy among people today to go and vote. Frankly, if I feel that the candidates in the fray are not worthy of my vote, do I have a choice to express the same?

Though sitting in Mumbai I’m not in a quandary today, I’m worried. Worried because what my Karnataka mates are going through today, many of us have to endure when the time comes to vote for the party/front at the Centre. It looks like “A scam a day may soon keep Dr.Manmohan Singh away”. With an early election looking imminent, the dilemma for the voter gets bigger.

I presume that most fellow Indians have had enough of this Congress led UPA and are craving for a change. For them to satisfy their craving, they need options to vote for in the next General elections. In states where BJP is strong (and that is only 6-7 states I guess) may be they have the option of voting for BJP. But in most of the other states one has to dive into deep-sea to escape from the Congress Devil. In many states where BJP is absent or present in absentia, the people have no choice but to exercise their “Best among the Worst” rule while voting. When they do that, they give fillip by default to parties like the Trinamool Congress, CPI/CPM, YSR Congress, Janata Dal (Secular), Shiv Sena, Samajwadi Party, Bahujan Samaj Party,…,…which again start extracting their pound of flesh when the Government formation time comes. Irrespective of the national sentiment for change we may yet get a Government we never wanted. Because under the present system who will rule is decided not by “National mood” but by “Rational Greed” (Money bags, ATM Ministries, Rajya Sabha nominations,…) of the fringe parties who claim to promote the cause of Regional and Sectarian aspirations but in reality have been furthering their own “cases”.

Problem definition is always easy. Finding solution is not. Yet, let me attempt. The way forward is certainly to “CHANGE” the present system. That could be in the form of electoral reforms which include

• Election Commission to define a template and minimum criteria for an “Election Manifesto” essentially making the document a “Minimum Agenda for Governance” for the party coming to power.

• Parties not fulfilling 70% of their manifesto promises should be disqualified from contesting in the next elections. So that there is accountability along with accounts.

Some of the above ideas are indeed outrageous and outside the realm of today’s political imagination. However I strongly feel that small changes may not work. We need paradigm shifts. So that we actually see Democracy at work and not some “Democrazy”!!!