A peek into any of the corporate board rooms today across continents is more likely to show “Focus on Emerging Markets” as a bullet point in their company’s strategy slides.  The reasons are understandable and more than obvious. Developed countries of yore after years of driving consumption and growth are showing fatigue and companies have no choice but to look beyond G5 to get their “G”rowth.  Depending upon the individual companies reach, the scope of “Emerging” markets may vary but it’s almost certain to have ‘Incredible India‘ in its list. This is not surprising though.

The above numbers on India are mouth-watering for any head honcho hoping to take his/her business to the next orbit.  However very few are familiar with the challenges and uniqueness of doing business in India and hence unable to see thro the ‘Emerging’ mirage!

Having cut my career teeth and got my feet wet in India and also having been exposed to doing business in other countries, I’m of the view that India is one of the most complicated and toughest countries to do business and survive and here are some of the reasons why:

So any foreign company contemplating to ride into this Emerging market bandwagon may be in for some real shock and awe!

If the environment is so hostile for doing business, how’s that many of the Indian companies manage to do business and also grow and that too for years?

So if a foreign company wants to emerge successful in India it is not impossible if it can follow some simple rules:

The above list may not be exhaustive. The bottom line is “In India – think like an Indian” which is to in short “Expect the Unexpected” and prepare yourself for the Incredible Indian Experience. Welcome to jugaad.in!

For its signature edition (next day of budget) Economic Times commissioned the biggest names in Advertising like Piyush Pandey, R.Balki, Prasoon Joshi, Joshy Paul,..to create ads on how they see India in the midst of a global slowdown.   For the same, Balki created this ad and I liked it the most and would like to share. He commented on the ad thus :

“It’s not in any brief for an ad agency to tell the client to change the product. But modern India is a ‘product’ that could do well with some change. The ad highlights the necessity as well as the opportunity to change India— to make it the real Incredible India” 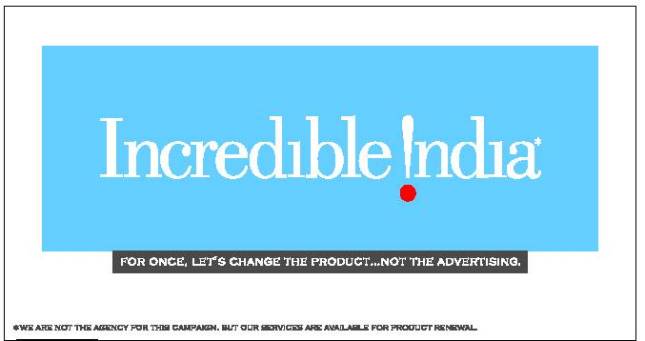